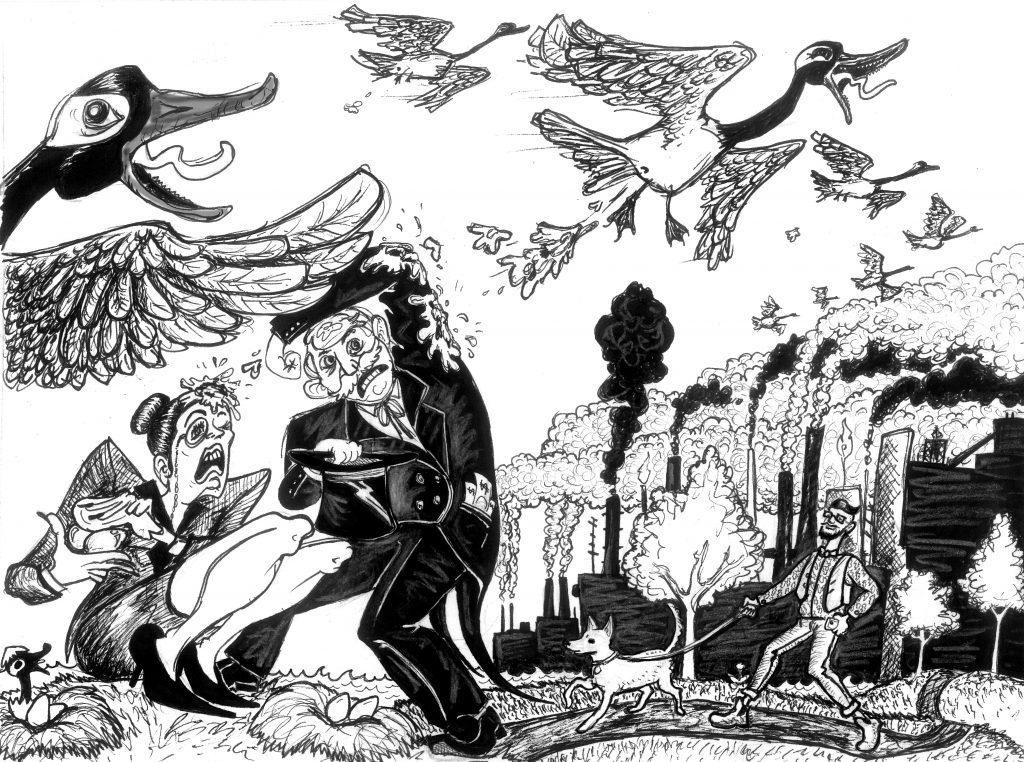 Can you believe this? This shit drives me crazy.
Makes me wanna plunge my head in the toilet and sing a slow lullaby.
I mean, when I hear “light refreshments” I think hummus, vegetable ranch dip, maybe even a ritz cracker or two. If I was being really optimistic I might even hope for some egg salad . But what the Hamilton West Harbour Committee means when they say “light refreshments” is a middleweight fruit platter and a half-tray of cookies. That’s fine, I get it, you’ve got two-hundred grand to spend on laser pointers and sound cannons to keep the geese away but you can’t spring for a shpeckle of egg salad. That’s fine. You’re about to make a filthy million selling Hamilton’s waterfront to some rabid condo-rats, but ya – hummus can be a bit pricey.
Makes me sick.
But the melon is great, and the cookies got peanut butter, so I triple-decker the paper plates and make a nice smorgasbord to take back to my seat, an overflowing cup of joe spilling onto people’s laps as I walk. Serves em right for serving up 2%.
The crowd is making eyes at me ’cause I’m narrating all of my complaints under my breath. I’m only twenty minutes late for the meeting and already the cookies are half gone. What the hell did I walk all the way down here for?

The suits are already knees deep in their own drivel. I’ve seen this Chris Phillips kid before – he’s the one they fly around the world selling the waterfront plan to developers. His job is to make sure that by time Pier 8 hits the auction block the investors are already foaming at the mouth. But tonight all he’s gotta do is make us riff-raff feel included in this billion dollar land grab. Naturally wherever he goes the “light refreshments” follow – keep our mouths full and we won’t ask too many questions eh Chrissy?
His spiel tonight is polished. A greasy project dressed up in dapper shoes. Not that it’s anything new. The city buys up old industrial land then pays for the cleanup and hands it off to their developer pals. Just like the old theatre on James or the Lister block, the same guys who do all the sprawl up on the mountain come trotting back out to help. Chris is sweating and saying, “work live and play” over and over, as if he’s already moved on to giving a sales pitch for the 1600 condos he wants to put out on the pier.

“. . .and rest assured the social housing in the North End will only be emptied out as a temporary measure. . .”
This guy cares about social housing like I care about the lice on my head. If the city stooges gave a single fuck they’d use the land they already own to build something affordable.

This waterfront project is a nightmare for anyone without half a million to blow on a condo, but the room full of geezers just wanna talk about how the skateboarders are getting wax all over their precious benches. There’s also a couple yuppies here dying to feel civically engaged but who can’t quite remember what it is they’re supposed to care about.

So the suits are winning. The deal is gonna be a smashing success. I’m over it. 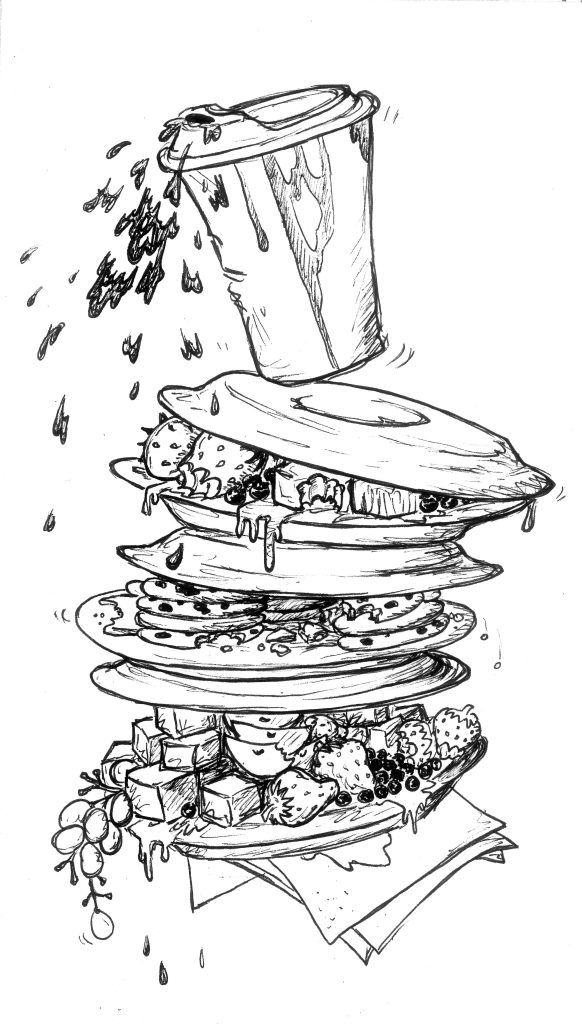 But then they bring in the Scientists to talk about how geese are the real enemies of the harbour and how they’re gonna get rid of em all, which makes me cough up a full piece of pineapple onto the floor. What kind of nitwitted shitstain would take 3 years to asses Hamilton Harbour and decide that the geese are the biggest problem? I don’t remember us needing an 11,000 ton metal condom to cover up any Reef of goose shit. I don’t remember any flaming chimneys down on the harbour because of goose shit. Ya I get it, they’re plopping bacteria into the water, real tragedy, but I can point to a hundred things putting worse shit into that water every day.
“I’ve seen your goons shooting blanks at those poor honkers! Thought it was a real gun at first, scared the piss outta of me!”
“Maam, the Q&A will be at the end of the presentation, but that’s a great segue into our next slide about water-foul deterrence.”
And that’s when I really start cackling. You know what these clowns are up to? Here’s the laundry list: laser pointers, dogs, pyrotechnics, sound cannons, effigies, grape-flavored poison in the grass, oiling the eggs. . .
“When you rub a certain kind of oil on the eggs it suffocates the young, but the parents don’t know so they don’t go lay eggs anywhere else”.
Unfuckingreal. I knew these people were bad, but that’s cold ain’t it? All so that little Katey can go swimming in the bay without getting pink eye. Meanwhile every time it rains you get rivers of unfiltered sewage streaming in from Woodward Ave, and these wankers are oiling goose eggs!
“Why don’t you just pour gasoline on em and light em up! Might be faster”. I shove another handful of strawberries into my mouth and a snarky laughter spreads through the crowd.
“Unfortunately that wouldn’t be a possible strategy ma’am. Because they’re migratory birds there’s a great deal of restrictions. . .”
This coffee is making my throat dry and the pineapple’s hurting my tongue so I just get up to leave. I can’t listen to these monsters jabber anymore.
“Ma’am we encourage you stay until the end. We look forward to engaged community feedback after the presentation”.
“You want my feedback?”

I turn to face em and pull up my skirt to give em a glimpse of ol’ Molly Muncher the Wild Haired Crone. “Get fucked you walking corpses! How about some real cream next time?” and I push back out into the tepid winter streets. What ever happened to cold Januarys?
Probably not allowed in Evergreen anymore. Whatever. I got plenty a hustle left on this block. And besides I see right through their bullshit consulting scam.
The vultures are ripping this city to shreds. I’m keeping my head above water, but it’s true it’s all starting to get to me. I feel like I’m the only one who sees through all of these glitzy spiels. I just wanna keep to myself, collect my score and keep moving, but this is getting to be too much. Chintzy bastards can’t even cough up for a little egg salad. Light refreshments my ass. I just don’t know about this city anymore.

During a late night editorial meeting, only weeks after we first floated the idea of a The Cannon Street Bellows, a stranger walked into The Tower. She said that she heard some kids got dressed up like pigeons and sprayed sour milk at developers, we said we heard that too. She chuckled and handed us an envelope, filled up a mug of coffee for herself, said she would have more in a few weeks, and walked out with our mug. The envelope was labeled G.L. and contained an article about the 541 cafe on Barton St hand written on coffee-stained foolscap. We were stunned — even for a crew of cynical anarchists this was pretty curmudgeonly stuff. But it seemed like the real deal, so we decided to give it space in this publication. A few months later we received another envelope, this time containing an article about Hamilton’s West Harbour Development Plan. We hope she keeps coming around!