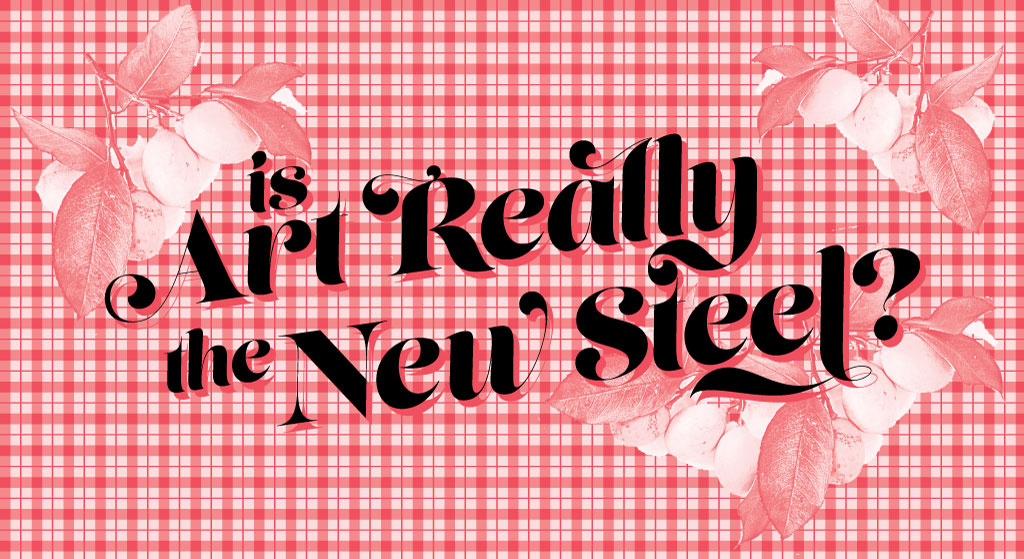 From the flashy headlines of national newspapers and the glossy billboards in the downtown core, to the enthusiastic proclamations of investors and the cheerleading statements of city politicians, much is being said about the “renaissance” of our city. Words like “revitalization”, “reinvention”, “renewal”, and “redevelopment” are thrown around to talk about Hamilton as an up-and-coming city of boundless possibility. Walking down the street, sleazy men on slick real-estate signs advise those that pass by to “Build the Ambitious City”. Commentators speak of budding community, artistic innovation, and economic opportunity. But what does it all mean? These phrases hide far more than they reveal, painting a rosy picture without acknowledging all those left behind and thoroughly fucked over by the changes happening in Hamilton. So, lets look at two popular slogans a little closer:

“Art Is the New Steel”

In 2010, Centre 3 for Print and Media Arts, an artist-run center located in the heart of Hamilton’s burgeoning art scene, launched the “Art Is the New Steel” campaign. Intended to raise awareness and promote the centre’s various programs, the slogan quickly took on a life of its own. It spread beyond the centre, popping up in galleries, shops, and cafes, as well as in local magazine advertisements. The phrase seeks to replace our city’s traditional blue-collar working class image with an image of the creative professional as key to Hamilton’s future.

For more than a century, the steel industry was one of Hamilton’s largest employers, shaping the geography and politics of the city. In the 1970s, Hamilton had a larger percentage of its labour force in manufacturing than any other major Canadian city. Steel company giants Stelco and Dofasco dominated the economic and physical environment of Hamilton. Working class neighbourhoods developed around local factories as skilled, unskilled, and immigrant labour flocked to the city for work.

The steel industry wasn’t without serious issues. The work was hard and often carried huge health and safety risks, and its effects on the local environment were, and continue to be, disastrous. Companies exploited their workers, extracting huge profits off of the backs of broken down bodies. Yet the workers resisted: they formed associations, organized in unions, and frequently went on strike. Through struggle, they gained secure employment, better working conditions, and benefits for themselves and their families.

In recent decades, steel manufacturing has been hollowed out as companies have been bought out, downsized, and moved elsewhere. Responding to this change, new industries like the creative sector have grown. However, things are not as simple as replacing one industry with another, and the social consequences of this shift echo throughout the city.

The arts and culture industry is infamously precarious: there is rarely any job security, let alone benefits, and there are actually very few jobs available. Those who can carve out paid work are more likely than other workers to be self-employed and to hold multiple jobs. The average income of artists and cultural workers is between 10-30% less than the rest of the Canadian workforce. Unions are rare and the conditions for collective struggle largely absent. This shift signals a huge blow to our city’s legacy of vibrant labour struggle. In the place of a fighting spirit, we’re offered empty platitudes and shitty art.

Moreover, as we’ve seen in so many other cities, hip art scenes are usually a stepping stone on the ruthless path of converting poor neighborhoods into yuppie havens. Whatever thrill James Street North is finding in its art scene is bound to be short-lived. Even if this city wanted a new steel industry, a fleeting and precarious art scene is hardly a suitable candidate. 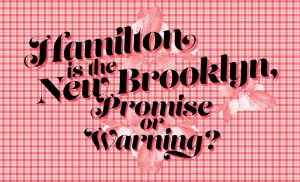 “Hamilton Is the New Brooklyn”

Working hand-in-hand with the “Art Is the New Steel” slogan, another phrase has gained popular currency in the city: “Hamilton Is the New Brooklyn”. The Hamilton Spectator, The Globe and Mail, The Huffington Post, and even the fashion magazine Elle Canada have all proclaimed it. According to these sources, Hamilton is shaping up to be Canada’s equivalent to Brooklyn, and this is presented as good news. The assumption is that we should want to be like Brooklyn — it has hip cafes and a huge art scene, an exciting nightlife, and people flock to live there. Sounds great, right? The simple answer is that while it may sound okay, we should take this phrase as more of a warning than a promise.

Longstanding communities in Brooklyn have been torn apart by processes of gentrification in recent decades. Historically known as a hub for immigrants and black and brown folks, neighbourhoods in Brooklyn are being transformed: the white population is growing while the racialized populations are being pushed out. Soaring housing prices coupled with the predatory practices of landlords and real estate agents have meant the displacement of all those who cannot keep up. There is no room for low income and poor folks. Investors and developers are raking in huge profits as wealthy newcomers move into trendy neighbourhoods, pushing out families who have lived in the area for generations.

Brooklyn is ranked the least affordable housing market in the United States, with a median rent of $3,100 per month. Townhouses on desirable streets are commonly sold for over $2 million, while condo units typically start in the $700,000 ballpark. In some areas, residential rents have risen by 200%. Families entering homeless shelters in New York come in the greatest numbers from Brooklyn. Residents, social service agencies, advocacy groups, and even the city’s current mayor speak of an affordable housing crisis. More and more, the city is losing the people, culture, and diversity that once made it an interesting place to live, and it is instead becoming a sanitized playground exclusively for the rich. So what about Hamilton?

As of 2015, Hamilton holds the title of the city in Ontario with the sharpest increase in rental rates. More recently, a report issued by the Canada Mortgage and Housing Corporation cautioned that Hamilton was at risk of becoming an “overheated” housing market, where demand rapidly outpaces supply, leading to overvaluation. Rent is skyrocketing at the same time as our vacancy levels have reached that of Toronto. In practice, this means housing is becoming less and less affordable and more and more competitive, squeezing out those who are most vulnerable. This trajectory is troubling. We don’t want our city to be like Brooklyn. It’s bad now, but it can get much worse.

This Is Class War

Our city is a site of antagonism and conflict. Reading between the lines and looking past the hype, slogans like “Art Is the New Steel” and “Hamilton Is the New Brooklyn” are about gentrification and, ultimately, class war. The dynamics they speak to are neither neutral nor desirable. Gentrification in the city means the privatization and increased surveillance of public space; it means calls to clean up the city being used to justify violence and criminalization; most obviously, it means increasing property values and rents.

In this climate, there is no such thing as the much-touted “no one left behind” redevelopment strategy. Ambition translates to a ruthless drive for power and the accumulation of wealth — building an ambitious city means caring about profits and not people. The flip side of urban renewal is social cleansing, the reality of revitalization is displacement, and the offshoot of arts/community partnerships is often increased policing in our neighbourhoods. Creative labour is a harbinger of all out war against the poor and working class communities of our city. No clever catchphrase can hide that this process benefits some, while marginalizing many more. Fuck an ambitious city. We deserve more.